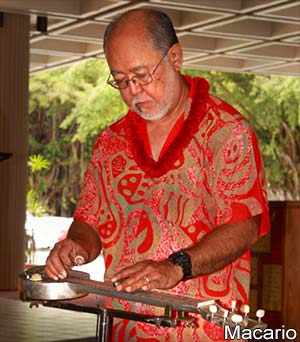 Born in Honolulu, Hawaii, Dwight Tokumoto graduated from the University of Hawaii with a Bachelor of Music degree. This multi-talented musician and composer plays several instruments including the guitar, ukulele, and the Hawaiian steel guitar as well as classical guitar.

He has played on the albums of many artists in Hawaii and California, including playing the steel guitar in Tahiti for Tahitian entertainer, Hina Pankowski's CD and with Hawaii entertainer, Diana Aki's newest recording. Dwight was also featured on the 2007 Slack-Key Christmas CD produced by Grammy-Award winner, Charles Brotman. He was featured on Kahulanui's Hoku-nominated CD "Hula Ku'i" as well as Mark Yamanaka's "Lei Maile" CD.

Dwight played music for many years in Waikiki at the Princess Kauilani Hotel and the Halekulani Hotel. In addition, Dwight also performed in French Polynesia at the Tahiti Beachcomber Hotel, several weeks at a time for the hotel's "Tiare Bar" as well performing on the island of Moorea. He has also played the steel guitar in Japan and for Japanese television.

Dwight is a credential teacher currently retired from teaching Special Education in the public school system both in California and Hawaii. For the last several years, Dwight has teamed up with Hawaii musician icon, Cyril Pahinui to teach weekly at Connections Charter School in Hilo. This special music program has encouraged and enabled many new young people to the field of Hawaiian music.

In addition to farming and teaching, Dwight currently plays music with the group, Kanakapila on Tuesdays, at the Hilo Tavern Bar in downtown Hilo. He and his wife Pua also operates the Waipunalei Hawaiian Coffee Farm in the town of Laupahoehoe.

Copyright ©2016 by Hawaii Institute for Music Enrichment and Learning Experiences, Inc., and Cyberventures Unlimited.Terms of Use